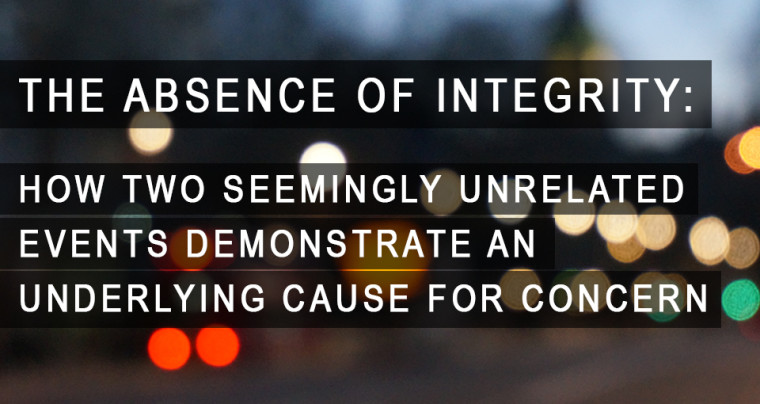 I’ve had the privilege of working for two companies who list “integrity” as one of their core values. In my experience it has never been just a word painted on a wall or printed in an employee handbook. It is an active way of life, a standard to which everyone is held. To me integrity centers around the idea of doing the right thing, because it’s the right thing.

That an organization chooses to include integrity as one of only a handful of traits they consider critical to upholding their culture and achieving their mission tells me two things: 1) Integrity is important and 2) It’s uncommon enough that it needs to be formally included to reinforce its importance.

Two recent, seemingly unrelated events have confirmed for me that integrity is not as common as it should be. I don’t think it’s a clear indication of the decay of our country’s moral fiber or anything drastic like that, though I can see how that case could be made. I’m not sure the problem is quite as extreme as that, but it’s certainly prevalent enough to warrant a discussion.

I know ours isn’t the first era in human history to struggle with right and wrong, but again, the parallel that can be drawn between two unconnected situations, made it occur to me that maybe we should be reinforcing the value of integrity whenever possible. Maybe we need to remind ourselves regularly about why it’s a trait to value. Maybe our kids need to hear, and see, us demonstrate its importance.

The Common Theme Between A Hit-and-Run and Deflategate

In case you’re unaware or don’t remember, “Deflategate” is the clever name for the alleged “scandal” that happened during the 2014-2015 NFL Playoffs. New England Patriots quarterback, Tom Brady, was accused of knowingly and intentionally using under inflated footballs. There is some confusion as to how involved he actually was, but there is little disagreement that the balls were significantly below their required PSI levels.

There is also little disagreement that the under inflation would lead to an advantage for Brady. It’s easier to grip and throw a ball that has slightly less air in it. To simplify a complicated situation: the Patriots illegally tampered with equipment and gained a competitive advantage as a result.

Slightly less publicized was a recent hit-and-run accident involving my wife. Dani was rear-ended on a highway exit ramp. When she pulled over for what she presumed would be a call to the cops and an exchange of insurance information, the other driver drove off. Thankfully no one was injured.

So what does a national news story involving an NFL superstar and his world-class franchise have to do with a lead-footed Subaru driver in the Central New York suburbs? Only one thing: integrity. Or, in this case, a lack thereof.

To Affect or Not to Affect

When we make a decision or take an action that lacks integrity it is rarely done in a vacuum. Someone else is almost always affected. In the case of Deflategate, the people affected include the Patriot’s opponent, the Indianapolis Colts, as well as the millions of fans who enjoy what they expect to be a fair competition amongst the world’s elite athletes.

The Patriots won the game 45-7, but anyone who has played sports knows the importance of momentum and confidence. Anything that helps to sway those intangibles is an advantage. In this case, it was an advantage that came against the rules. And I think that is the most important topic here. Advantage or not, rules were broken. There was an extreme lack of integrity. And people were negatively affected in the process.

Had the driver who hit Dani pulled over, our insurance would not be facing a bill that will cost thousands of dollars. We would likely not be forced to cover our deductible out of our own pockets. Again, a lack of integrity costs others. It’s not an action that only stands to give the doer an advantage. It almost always balances out at the expense of someone else.

Where Do We Go From Here?

I’m not writing this from an ivory tower. I’m sitting on my couch, neglecting the baby as she pulls every one of the wipes out of the package. I have flaws. I have moments where my integrity could be questioned. I’ve tried to limit those instances in the past, mostly because I do value doing the right thing. And I want my kids to see me walk that walk.

Making the connection between these recent real-life events has only served to confirm to me how important it is. Our actions, for better or worse, almost always affect other people. We have the ability to choose whether our impact is positive or negative. It’s not always easy. Hell, the right decision isn’t always clear.

But if you’re being honest, is that the kind of world you want to live in? One where everyone has only their own best interests in mind? I don’t. I want to live in a world where we can trust that we won’t be negatively affected because someone else thinks only of themselves. I want my kids to inherit a world where this is the norm. A world where organizations wouldn’t bother “wasting” one of their limited core values on a trait that everyone already naturally possesses. Hey a guy can dream, can’t he?

Which brings me to one final, but important, question: What are the chances Tom Brady drives a Subaru?