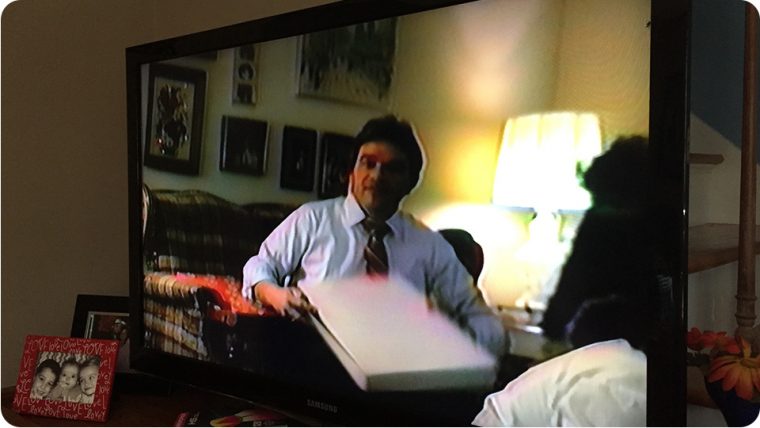 Six months. One hundred eighty-two days. A half a year. However you want to slice it it’s a number that knocks me over today. That’s how long it’s been since I last hugged my dad. I talk to him every day. And sometimes I hear him talk back. But it’s been exactly twenty-six weeks since he was with us last.

There are moments when it feels like only yesterday that we were by his side in the hospital, and then there are other times when I find it hard to remember what his voice sounded like or what he looked like before he got sick. Those days are the hardest. In a way, these mini-anniversaries help. They make me face it head on. That might sound strange, but with three young ones at home, there’s not a whole lot of time to brush my teeth, let alone think about things.

So we hit a little milestone like today, December 26, 2016, and I take some time to think. Or in this case, to write. At first I wasn’t sure if I would post this, but there are some things that I have been contemplating that I think are worth sharing.

The above photo is from an old family movie that was recorded on December 25, 1989 — almost 27 years ago to the day. It’s my dad at age 35, the same age I am now. He had lost his own father only nine months earlier, in March of that year. It was the first Christmas following his dad’s death, just like we experienced yesterday.

In the video, we were at my grandmother’s house, the home my dad grew up in. He’s opening presents and sitting on the same couch my grandfather sat on as he battled lung cancer. There’s something equally eerie and magical about watching it. I’m not certain I have the words to explain it, but I know it makes me feel a lot of things.

When I watched it recently, probably for the first time in more than 20 years (and certainly through a brand new perspective), I was sad. It was sad to think that the man I was watching on the video is now gone. It was sad to think that I could no longer see him, or hear him, or talk to him. It was sad to feel that I had long taken moments like that for granted and that I maybe didn’t fully acknowledge his importance while we had him here. That’s all pretty common for those who are grieving, though. At least that’s what I’ve been told.

But what really got me was when I started thinking about it in numbers. Whenever you want to know the truth, ask the numbers. Numbers by themselves never lie, the lies come from the people who relay them. What the numbers told me this time is back in 1989, at age 35, my dad was more than halfway through his life — 54.5% to be exact. Of course, there was no way of knowing that then. But for me, someone who is 35 years old himself, a thought like that strikes a certain chord. It hits a little bit close to home. It makes you contemplate some things you previously hadn’t spent much time on.

Most blatantly, it brought to mind the thought of my own mortality. No one wants to think of 35 as middle-aged, but for my dad it was — it was 4.5% past the middle if we’re splitting hairs. We’re all going to die, though, so I don’t put too much weight on the idea of mortality as I do that of dying with something left in the tank. Les Brown once said that the cemetery is the richest place in the world because that is where all the unwritten books, the unsung songs, and the undrawn art is buried. He’s right if you think about it. How much potential goes unfulfilled?

Ever since my dad was diagnosed, back in 2014, I have thought about the idea that he would not outlive many of his excellent, passionate ideas. He was a man with so many he often couldn’t get out of his own way to see them through. Not all of them at least. But if you’re a glass-half-full kind of guy, which my dad was, and which I try to be, then you realize that it’s not so bad to have more than you can get to, so long as you make the things you touch shimmer and shine. And boy did he do that.

But no matter how much I’ve tried to justify why it’s okay that he never got to some of his grand ideas, I still haven’t been able to shake that thought from haunting me in my own life. It’s always been that way for me, but even more so now. You never know when you will start sliding down the backside of the bell curve that is our life span. We might even be there now. It’s not the most uplifting way to think, but sometimes we need to see what a half-empty glass looks like, even if we never intend to drink out of it.

So I watched that video and looked at that still frame, and at first I saw the pain of missing my dad, the fear of unfinished work, and the reality that at any point we could go from counting up to counting down the days we have left. This was about three months ago.

But tonight, as I write this from my in-law’s house, I’m seeing this picture in a different way. Gianna is curled up next to me, sleeping peacefully, no doubt dreaming about the overabundance of gifts she received today. Gabby is in the next room with her mom, and Joey is having a slumber party in the living room with his cousins. The clock has just passed midnight. It’s officially December 26, six months since the death of my dad, and not a creature is stirring, save maybe the mouse my father-in-law has been waging war against.

It’s almost like the still of the night, the peaceful quiet all around me, has caused me to lower my guard. I think of the photo. It’s etched in my mind now, so all I have to do is close my eyes if I want to see it. And when I do, I see a man who was likely as broken as I am. I see someone who probably felt the weight of the world on his shoulders, with responsibilities around every corner. And somewhere, tucked away in all of those layers of life, was that question, that persistent, unbiased question: How do I do all those things I have to do, and still find time to be who I am supposed to be? In Les Brown’s terminology, how do I keep from one day becoming the richest man in the cemetery?

But none of that stress or strain showed through in that video. It was Christmas, after all. And so, when you swap out the lens you view it through, you instead see a man who smiled through his pain, who led our family confidently despite the mountains of uncertainty he must have felt, who sacrificed some of who he might have been to be sure we had the opportunity to become who we were supposed to be. More than anything, you see a man who did his best to make sure our Christmas was as magical as it could have been. That’s what a dad is supposed to do, and that’s what mine did.

In the days leading up to Christmas this year, I thought a lot about how I’d make it through. And each time I did, it came back to the same motivation: my kids. They were counting on me to do my part to make their Christmas magical. I remembered the smiles I saw on my dad’s face in the video as he faced almost identical circumstances as those I’d be facing. And I saw what right looked like. Without having any idea at the time, he provided me with a blueprint for not only surviving your first Christmas without your dad but finding a way to enjoy it as well.