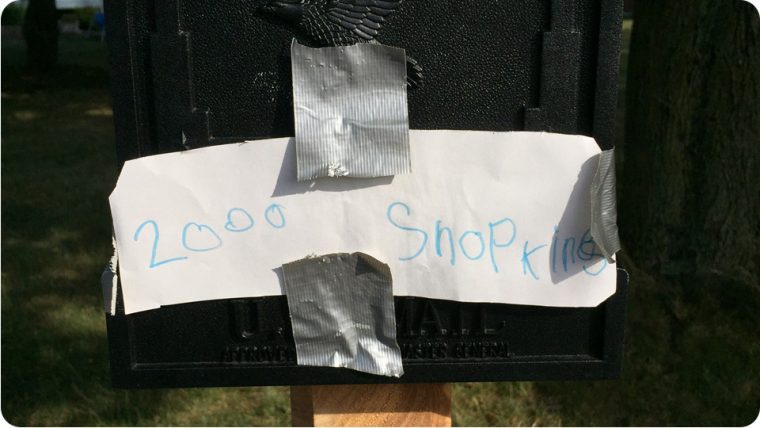 The basic nature of parenting is that we want to give our children better than we had. Whether it’s financial, emotional, physical or anything else, we want their lives to be better than ours. No matter how fantastic our childhood, we’re always trying to make things better for them.

Usually that is a very noble outlook for a parent. But sometimes, I’ve found my judgement becomes cloudy. There’s a very fine line between spoiling them and providing for them. Sometimes we don’t even realize what side we’re on. And that’s what I want to talk about today.

I recently toed the line. At least I thought I did. Some may think I flat out stomped on it. And others might wave it off as something not even worth mentioning. I’m curious to hear your thoughts in the comments.

While at work, I received a text from Dani. It was a picture of the front of our mailbox with a piece of paper duct taped to it. On the paper, in a child’s handwriting, was a note that read: 2,000 Shopkins.

Putting all the pieces together, I realized that they were sending out an order form through our mail carrier. Not for one Shopkin. For two thousand Shopkins.

In case you’re not familiar, Shopkins are little rubber toy characters that replicate and personify food and other random objects. Think rubber MicroMachines with no wheels that look like food. They’re practically useless, but kids love them.

I laughed in my seat. This was a new high for kids who would happily waste away their entire summer vacation in front of an iPad if we let them. Dani went on to explain that Joey and Gianna did it all on their own, only asking for help when it came time to need the spelling of “Shopkins.” It was all them, from idea to execution.

Not bad. This was the closest we had gotten to a lemonade stand. I was proud of their initiative. I was humored by their tactic. I was inspired by their boldness.

And because I appreciated the effort, I felt I had to respond. So I went onto Amazon and filled my shopping cart up with a variety of Shopkins. Not two thousand (the kids later told me the sign said two million). And not quite 200…but close.

When I got home I took the sign off the mailbox. The kids came home with Dani after that and were quick to notice that the sign was gone. I told them the mail lady had just taken it with her. This, of course, caused them to throw a party in the back of the minivan.

four boxes of Shopkins arrived on our doorstep. The kids celebrated their achievement. 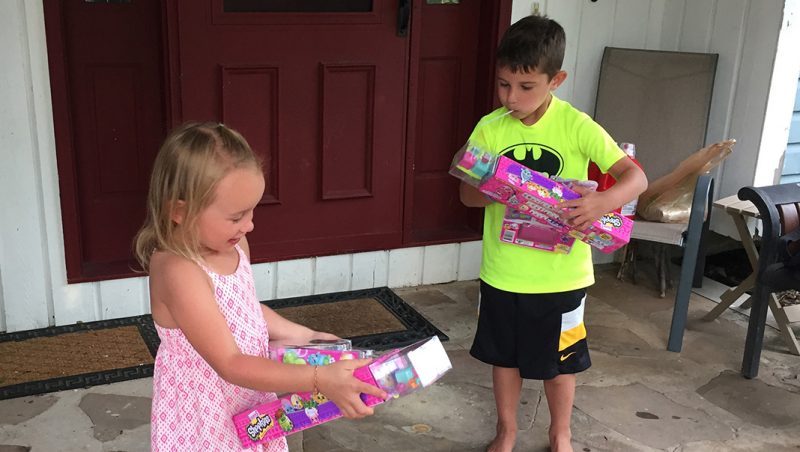 Now I’m left to wonder. Did they learn the right lesson?

What I Thought This Would Teach Them

When I was young, maybe a little bit older than Joey and Gianna are now, my friends and I had card sales. We sold and traded our baseball, basketball, and football cards to other kids in the neighborhood. That was when we weren’t out actually playing those sports ourselves.

Now, it seems like if it can’t be recharged the kids want nothing to do with it. I’m gonna sound like a curmudgeon, I know, but in my day, we were the batteries and the whiffle bat was the iPad. We passed out at night and woke up recharged and ready to swing that thing all day long without so much as a low battery warning. Now? Sandlots are too barren to even have Pokémon show up there.

So when I saw that picture of the Shopkins “order form” taped on our mailbox, and when I learned they came up with the idea on their own, I felt it was an opportunity to encourage and endorse the kinds of things that made my childhood so memorable and enjoyable.

What, exactly, did I endorse?

Ingenuity. Innovation. Creativity. Confidence that they have the power to influence their lives.

Part of me feels like it was just an excuse to spoil them. But a bigger part of me really does believe that there’s too much stagnancy in my kids, our kids. I think kids could benefit from being rewarded for proactive behavior. Sure, on one hand, proactive could mean they should have mowed lawns and bought the Shopkins themselves. But they also could have repeatedly begged us to buy them. But they didn’t. Their actions fell somewhere in between.

Like most other things, this isn’t an isolated lesson. It will have to be shaped and reinforced over time. And I’ll likely have the opportunity to explain that there isn’t a magic box at the end of their driveway. That everything is paid for by somebody. That casting a wish out into the world is only half the battle. But it is a huge part.

The bigger the dream, the bigger the result, even if it falls short. That’s what I ultimately want them to understand. Awesome, magical things can happen in your life if you make the effort. Sometimes the effort of putting an order form on your mailbox is enough. 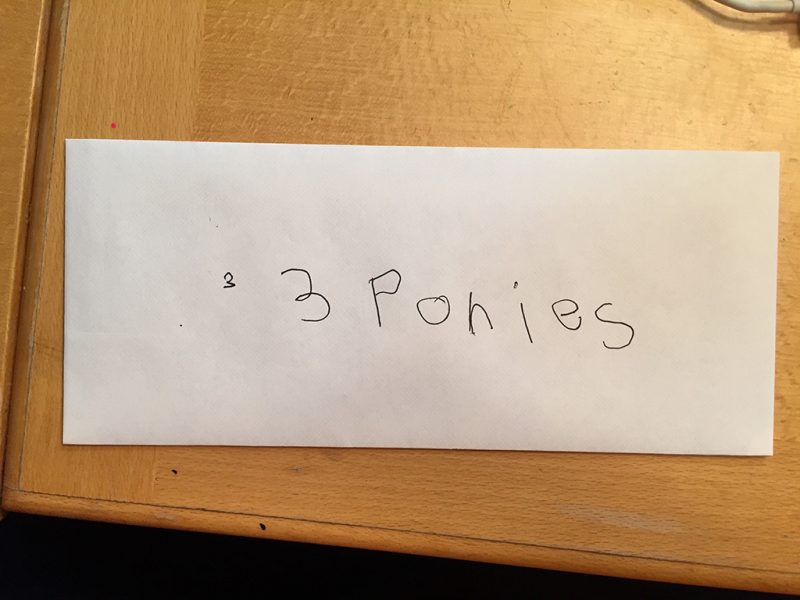