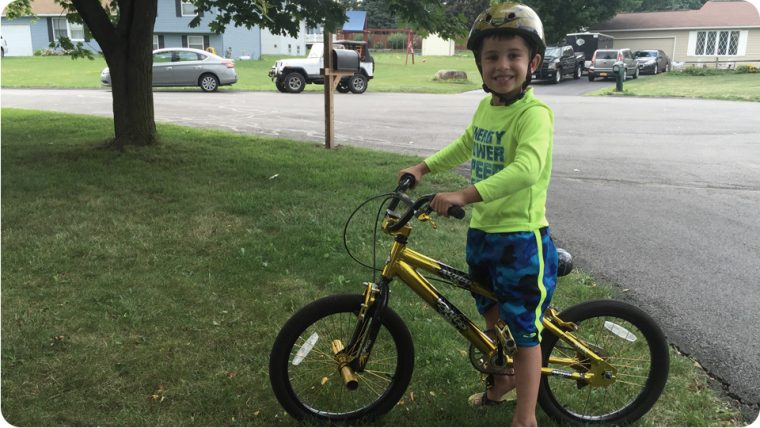 Fast results. Quick responses. Minimal effort. We want everything to happen sooner than right now. We latch onto overnight successes and laud their “sudden achievement” rather than acknowledge their climb up the dark side of the mountain. We fail to recognize the momentum that swings them into our awareness during their moment of glory. It could be that human nature blinds us to it. Or, it could be that it’s simply easier to believe that the super successful benefitted from that lucky break and that it wasn’t endless hours of hard, thankless work that prepared them. That way we don’t have to feel guilty for not putting the hard work in ourselves.

Throughout the 2016 Olympic Games in Rio, we’ve seen many athletes perform their world-class talent with such ease that it’s natural to ignore the thousands of hours they spent in the pool or on the court or above the floor. They make it look like they’re out there riding a bike. And I guess, in a way, they are.

Their talent has become second nature to them; their lungs as comfortable in the water as out; their tennis racket an extension of their arms; their body control while twisting in the air as natural as you or I walking down the street. But it wasn’t always this way. Behind those effortless skills are decades of training and hour upon hour of overcoming challenges.

Taking Off the Training Wheels

Our house sits in the pocket of a cul-de-sac in a quiet development which means the kids are able to play freely in the street. Early this summer I experimented with taking Joey’s training wheels off. The only effective method of learning/teaching bike riding I know is for the rider to ride and the teacher to hold the seat and run alongside the bike. So we tried that.

It wasn’t a complete disaster, but it didn’t go well, either. He stayed up for a few cycles. Then he fell. I was out of breath. He hit the mailbox. We laughed until I was out of breath. He stuck with it and got a little better. Then he scraped his knee and got frustrated. Put that loop on repeat for about an hour and that was how it went the first time out.

All in all, he put together a couple good runs, but he wasn’t good enough for me to keep the training wheels off. He wanted to keep riding his bike and I had other things to do. So after a while, we put them back on.

I don’t think he minded all that much. Sure, he’d prefer to be a two-wheeler, but having his training wheels on not only made him more comfortable, it gave him the freedom to ride when he wanted. Eventually, he’d have to turn the corner, but who’s to say it had to happen that day, his first experience riding without them?

Sometimes the best thing we can do for our children is let them decide when they are ready.

Joey hadn’t said much about ditching his training wheels since that day, but this past weekend, a few months after the initial lesson, something in me decided it was time to get him back on the horse, so to speak. (So much for letting him decide.) I mentally prepared myself to run up and down the street and started taking the training wheels off.

But I never got the chance to break a sweat.

On my way back from putting the training wheels in the garage, Joey was yelling for me from the street. I looked up and sure enough, there he was riding around the circle. All by himself. He looked like he’d been riding for years.

Excited and surprised, my first instinct was to jump on the idea that he was a natural. Look at my kid, teaches himself to ride a bike on the first try.

Of course, that wasn’t the case. But, just like the fallacy of the overnight success of the Olympic Champion, I failed to consider the work that had gone into preparing for that moment. No performance is ever that good without some kind of training.

Ever since I put his training wheels back on, Joey had unknowingly been preparing for the moment when he would get another try. It started when I aligned the wheels higher than before, so they weren’t quite on the ground, causing him to subtly rely on his own balance and not entirely on the training wheels. It continued when he pulled out his scooter and began riding that around the street, learning to balance in short spurts between kicks. It culminated as he grew more and more comfortable handling his bike overall, from pedaling to steering to braking.

Gradually, little by little, Joey was learning to ride his bike. And honestly, neither he nor I even realized that was what was happening. It wasn’t until he became “an overnight success” that we saw how far he had come.

Teaching Today To Be Understood Tomorrow

The point of all this — from Joey riding his bike to the talk about the Olympics — is to demonstrate the idea that teaching, especially parenting, is usually a long-term play.

It’s an investment that sometimes takes much longer than a summer to return value. Sometimes it requires us to take the training wheels off, then put them back on again, then move on to something different before coming back to the bike once more. There’s no such thing as a straight path.

But by and large, our kids are hearing us. They are learning what we’re teaching. It’s sinking in. And one day, perhaps years from now, they’ll act like it. And we’ll all be amazed at what an overnight success they are.

Suffering from imperfect parenting? Download our free ebook
Sign up below and get The Imperfect Parents Manifesto For Free!