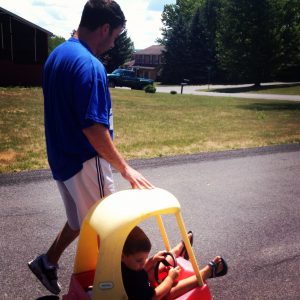 A couple nights ago I woke up startled. Joey has been known to walk into our bedroom in the middle of the night. Usually it’s simply because he wakes up and realizes he’s alone in his room. He and I don’t typically say anything to each other when I hear his feet pitter-patter on our hardwood floor. I just reach one arm over the side of the bed, and he latches on, his favorite blanket in tow. Then, I lift him up into the bed with us. My bed real-estate usually suffers some, but I don’t mind because it’s kinda nice to have him there with us.

This most recent time was different, though. I didn’t hear him walk in. I must have unconsciously felt his stare, because at around midnight I slowly opened my eyes, and his face was 8 inches away from mine, expressionless. After nearly choking on my heart, I went about our usual routine and hoisted him up into our bed, between Dani and I. Aside from still being slightly terrified by his creepy entrance (how long was he watching me? 30 seconds? 3 minutes? Longer?), things settled down pretty quickly and we both started to go back to sleep. That’s when the real show began…

We were visited by a thunderstorm, which parked itself directly over our house and performed what sounded like the grand finale of a fireworks show. There is not a doubt in my mind it saved its best stuff for us. The flash from the lightning lit our house with enough glow to read by, and the thunder followed almost immediately after. The house shook, rattling a picture off the dining room wall. Joey wasn’t crying, but he did look at me and timidly ask if we were going to have to get a new house when the storm destroyed ours. He was shaking, almost shivering. I told him no, we wouldn’t need another house, because the storm was likely going to destroy us, as well. No, I’m joking. I told him we, and our house, would be just fine. And we were.

After ten minutes or so the storm moved on, content to terrorize other neighborhoods and allow us to go back to sleep. Gianna, ever her father’s daughter, slept through the entire thing just like I used to do as a kid, often waking up the next day completely unaware that the rest of the house was up all night.

Now, by itself, this thunderstorm story isn’t much to talk about, but it did remind me of a nostalgic thought I once had. I’m not really sure what to make of it, but I think it’s interesting enough to try and put into words here…

When I was young, say in the 8-12 year-old range, my friends and I would get together for backyard football games, kickball in the street, and nightly hide-and-seek contests. We spent an entire childhood worth of summers doing these things, and then, one day, we reported home for dinner, or curfew (I don’t remember which), and that was it. We never played again. I’m not sure which day it was, or why that day became our last. I don’t even remember details of that day or game. All I know is I haven’t played a neighborhood kickball game in close to 20 years.

When that thought first struck me, it made me consider all the other lasts that just kind of happen, completely unbeknownst to us at the time. I’m not talking so much about the big things; those “lasts” tend to leave an impression on us, often because we know it’s going to be the last time as it’s happening. It’s common that we remember our last high-school football game or the last time we saw our favorite big-leaguer play before he retired.

But what about the smaller events, the ones that so critically shape our lives before quietly becoming part of our past? Why don’t those “lasts” leave a greater impact on us? Why can’t I remember the last time we walked home from the sandlot, under the buzzing glow of the streetlights, with grass stains on our knees and tears in our shirts? What was it that finally made us no longer get together for a summer night of hide-and-seek? Lasts are often sad as it is, but there’s something extra sad about the idea that not only don’t you always know they’re coming, but sometimes you don’t remember them at all.

As I mentioned, Joey has a habit of climbing into our bed in the middle of the night. Is he normally permitted to sleep in our bed? No. Does he probably take advantage of us by doing so while we’re half asleep? There’s no “probably” about it. The question then becomes: Why do we allow it? The simple answer is because we’re more tired than we are bothered by his intrusion. But the more complex answer, I think, is that we know eventually he’ll stop. He’s not always going to “need” us in the middle of the night. One night he’ll come in, and the next he won’t. And he never will again after that.

We won’t know it’s going to be the last time as it happens. We won’t wake up the next morning aware that we’ll never “have to” share our bed with him again. Thunderstorm or not, he’ll no longer creep into our room in the middle of the night. He won’t bring his favorite blanket to my bedside, waiting for my arm to reach down and pull him up. There won’t be any announcement, there will be no big fair-well tour; one morning we’ll wake up to a childless bed, and our bed will stay that way for all the mornings to follow.

Comment1 | Share | Tweet | Share | print | email
Categories: Past, Present
Disclosure of Material Connection: Some of the links in the post above are “affiliate links.” This means if you click on the link and purchase the item, I will receive an affiliate commission. Regardless, I only recommend products or services I use personally and believe will add value to my readers. I am disclosing this in accordance with the Federal Trade Commission’s 16 CFR, Part 255: “Guides Concerning the Use of Endorsements and Testimonials in Advertising.”