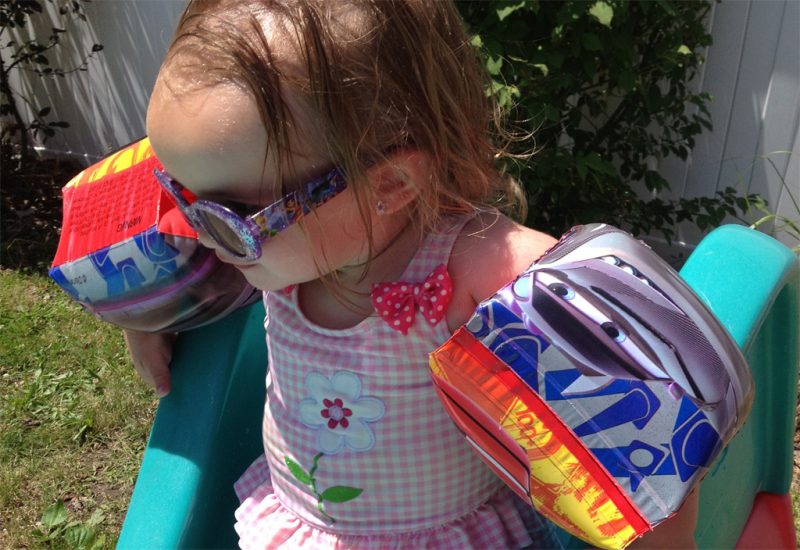 Not long ago I was at the mall, walking through the food court with the family. I was enjoying a free sample of fried-chicken and this woman came running up to us looking panicked. She said “I wanted you to know that he’s been hitting her.”

I looked down at the double-wide stroller and sure enough, Joey was halfway in Gianna’s seat playing “Why are you hitting yourself” with her face. That’s bad. It’s bad that he hit her and it’s bad that I was too busy chowing on Chicken Now to notice that my son was trying to reconstruct my daughter’s face in public. (That’s me, charter member of the Bad Dad Club.) But that’s not my biggest concern in this story. Boys will be boys; big brothers will beat the crap out of their little sisters.

The part I’m most interested in is Gianna’s reaction. She didn’t cry. She didn’t try to hit him back. She laughed. And when Dani and I tried with all our might to get him off of her and restore order in our stroller, she only laughed harder. This, of course, made Joey fight back harder, which brought on some exasperated laughter in me, which made Dani laugh and before you knew it, we were three people laughing at the little boy who couldn’t punch hard enough to make his sister cry.

Not only wasn’t she crying, she was one of the three “laughers”. I felt the judgement seeping through my bones as the snitch walked away in disgust.

The incident was funny, but once things were back to normal, it got me thinking. Did we have a little pain monger on our hands? Or, more accurately, is our daughter a sadist?

This didn’t just come out of nowhere, and it wasn’t based solely on the stroller/shopping mall/Chicken Now incident. Our little princess has been known to laugh during the scene when Nemo’s mom gets eaten by the barracuda. At first I thought she was laughing at something else, but sure enough, each subsequent viewing of that scene brings a chuckle. I know adults that are still affected by the murder of Bambi’s mom, but not my little girl.

I’m not one prone to worry. So I don’t. If I’m worried about something, there’s usually a pretty good chance that disaster is imminent. I just don’t like to trouble myself with stuff that usually doesn’t end up coming to pass anyway. As a result, I didn’t let this get me too concerned.

But then the Hilariously Funny Broken Pool came about.

We had a pretty strong wind storm in our neighborhood a few weeks ago. Trees were knocked down, garbage cans were streets away from their owners and fences fell over. It was nothing close to the disaster of the recent Oklahoma tornadoes, but it’s thought that a tiny twister may have touched down. As far as northeast windstorms go, we had some significant damage.

Among the damage was an above ground pool that was taken out by its surrounding stockade fence. An entire side of it was destroyed by the fence, such that from the street you can see clear into the inside of the pool. Keep in mind, prior to the storm you couldn’t see into the yard at all, let alone the liner of the pool. It was damaged beyond repair.

For a couple weeks the owners of the house didn’t do much to clean the damaged area, most likely while they waited to hear from the insurance agency. During that time, and because the yard pushes up to a road we drive just about everyday, we must have passed by a couple dozen times at least. And each time, without fail – unless she’s sleeping (why would we be so lucky?) – we hear Gianna pipe up from the backseat “Broken poooool! Hahaha!”

Still, I couldn’t help but wonder if maybe she was a glutton for punishment, her own as well as others.

Was my sweet, little girl heartless?

So it wasn’t an end to those behaviors that convinced me not to be concerned. Instead I realized that they were the exceptions. She laughs at anything that’s out of the ordinary. If she’s not used to it, if it’s silly, then it must be funny. But when I thought more about it I came to the realization that for every instance of inappropriate laughter, there are ten moments where we get an unsolicited hug or a smile that melts hearts.

She’s not a sadist, or a pain-monger; she’s not heartless or mean-spirited. She’s a little girl that is learning about the world. And just about every experience she has is her first time ever experiencing it. Think about that. We may have a “first-time” once a month or maybe once a year. Our kids (especially the young, young ones) are having one every single day. I think I’d be laughing with over-stimulation, too.

Once I had come to this conclusion, I didn’t think much more about it. It wasn’t until I came across a photo of Gianna, that my rationalization was truly confirmed. If someone is truly all those troubling things (sadist, pain-monger, heartless, mean-spirit) you don’t walk in on them doing something like this… 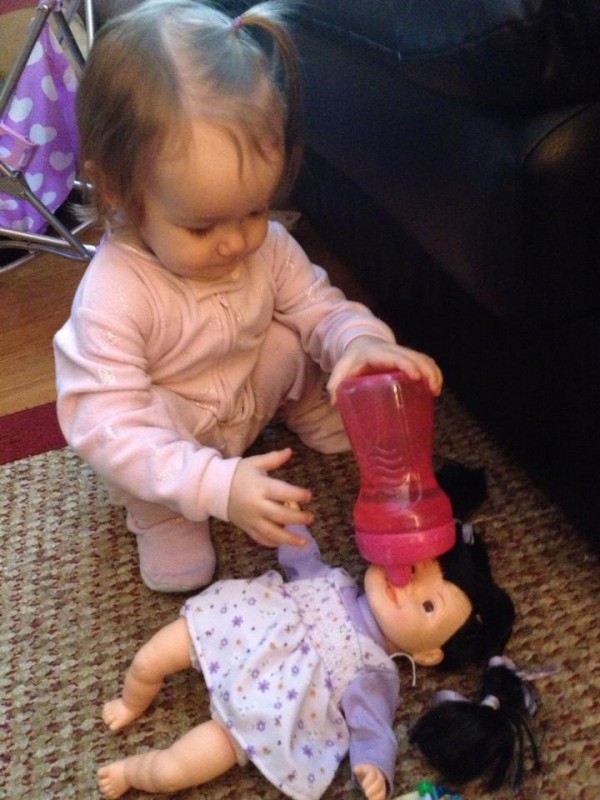 It also is proof that it’s not beneficial to classify kids (or anyone, really) into a specific, generalized group. They (we) are all very complex. We don’t fit in the same pigeonhole today that we did yesterday. More specifically, we are pieces of all those things (the good and the bad) that we experience.

Our daughter is a sweet, caring and kind hater of clownfish. Her future career will be in either mixed martial arts or storm chasing. See how ridiculous that sounds?