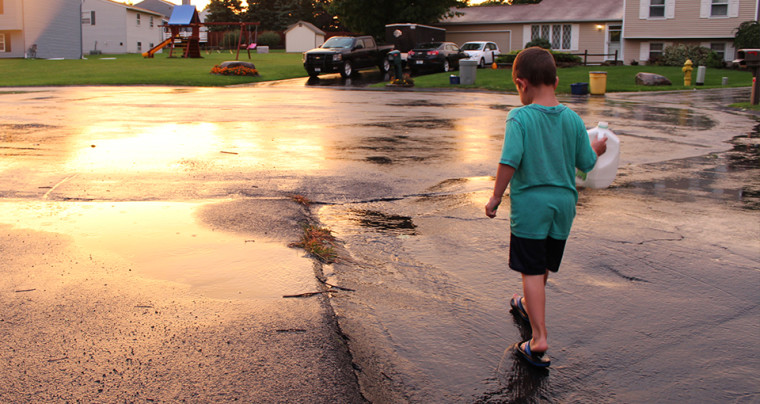 My car needed an oil change. I usually wait with it at the garage, but this time I left it to walk Joey to his babysitter’s house. It’s about a mile round trip. No big deal. I was curious to see how long the walk would take though, so I noted the time as we got started: 8:02am

The repair shop is on a fast road, so I directed us straight into an apartment complex parking lot. And the questions began. “Daddy, where are we going?”

“To the babysitter’s, bud.”

“I know, but we’re just cutting through.”

And so it went.

We cut across the grass on the backside of the apartments, headed toward the straightaway we’d be on for most of our walk.

I wanted to walk at a steady pace. I don’t know why that was so important. A steady pace would get me back long before the car was ready, and I wasn’t going anywhere until it was. I think it’s just that I’ve become used to going about my day as quickly as possible. Get Task One finished so I can move on to Task Two.

Joey, on the other hand, was putting all of his attention into Task One. This walk was all that was on his mind. Thankfully, it didn’t take me long to realize this. Once I did, I slowed my stride. He was curious, and I was going to see where that curiosity took us. 8:05am

It had rained the night before, but the roads were mostly dry, save for a handful of puddles gathered in the low spots on the pavement. There was more than enough room to stay away, but what fun would that be?

“Joey, watch out for the puddle!”

He was holding a tiny twig with a couple leaves still attached. He threw it up in the air and watched as the wind picked it up just enough to make it appear to fly. He chased it down and picked it up again.

So I did. We both laughed as it flew again. We stopped to pick it up a third time when he spotted the moth. I noticed the anxiety of needing to continue on Task One beginning to gain steam inside me. He bent down and stared at it for what felt like days. 8:07am

“If you could fly, where would you go?”

We left the twig behind, but not before we placed it in a strategic place under a pine tree. A place where we’d be able to find it again if we wanted. We began walking again, taking in the sights as we moved.

We were at an intersection —in a housing development where we’d seen less than two cars drive past us up to this point.

“You have to look both ways!”

So I did. There was a street sweeper 40 yards away from the stop sign. He wanted us to wait for it to make its turn. So we did.

Then he grabbed my hand and we crossed. 8:10am

The street sweeper was the topic of our next few minutes of discussion. We talked about what it did, why it did what it did, and what all the various hoses, brushes, and tanks were for. Some of my answers were guesses and I told him as much.

Even the street sweeper was moving faster than we were. And that’s not including the time we spent backtracking as Joey chased down a floating wish fuzz.

The consistent hum of the street sweeper faded away as we made our final turn into the babysitter’s cul-de-sac. Joey grabbed my hand again, and held it for the homestretch. 8:14am

Despite not having any more major distractions, we continued with our meandering pace. Joey’s friend lives on the corner and he began telling me stories about their adventures. He’s got one of those big, wooden outdoor play sets. Joey told me he wants one of them, too.

The final 300 yards of our walk were pretty silent. I’m not sure what he was thinking during that time, but I know what I thought about. At first, my thoughts focused on work. What things did I need to get done that day? It was Monday, after all, so there were all the usual pressures of getting back into the swing of a workweek.

That only lasted a few moments, though. I felt Joey shift his hand in mine and my thoughts were brought back to the present. I looked down at him walking alongside me. He didn’t really understand why we walked to the babysitter’s that day. But he appeared to be enjoying it. It was something different, something unexpected.

The truth is, we didn’t have to walk. I could have just as easily (maybe even more easily) dropped him off first and sat in the waiting room mindlessly scanning my phone as I waited. At that point, even I wasn’t entirely sure why we walked.

As we made our way up the driveway to the babysitter’s door, I noted the time. 8:17am

It took four minutes for me to drop him off. Four minutes before he was ready to let go of my hand for the day. Sure, it was just one day, but the symbolism of what that means is never lost on me. How much longer will he hold my hand at all? I tried not to rush it, despite the calls of Task Two and Task Three and Task Four beginning to take up space in my head.

As I walked down the driveway alone, I checked the time again. I wanted to see how long this walk would take without puddles and street sweepers and twigs distracting me. It was 8:21am.

Without Joey’s curiosity slowing us down, I was able to walk at a brisk pace. I was also left to my own thoughts. There would be no interruptions wondering why birds sing or where the wind comes from. This leg would surely be much smoother. I could probably get back in half the time.

I started thinking about why we walked. I’m not sure what I expected. I’m not sure what I was looking for, but now, looking back, I know what I found. I got a raw look at childhood—a revisit of my own, even. I discovered the beauty in balancing what needs to be done with what needs to be done right now. It turns out, few things ever truly fall into the latter category.

We can go for similar walks hundreds of times after this, but that one will be unique. Joey had no agenda. He had nowhere to be (as far as he was concerned), and that allowed him to do something on that walk that I, as an adult and a parent, have immense trouble doing on a regular basis: just live.

I can’t remember the last time I was fully present. Is it impossible as a grown-up, with responsibilities like work and bills and children, to ever be fully present anywhere? Or is it just a natural part of life that we’ll be split, equally aware of what’s around the next corner as we are of what’s directly at our feet? Are we destined to walk through life in a cloudy, dream-like state? Is that really what our purpose is?

I cut back through the parking lot. The one where this adventure got its start. I turned and took a quick look behind me, realizing that I was a different person than I’d been when I woke up that morning. A close up view of a street sweeper will do that to a man. I continued with the last few steps to the garage. My car was still not quite finished. This same car would be dead less than one week later. Complete engine failure. It was 8:34am.

It may not always feel this way, especially when the sometimes proverbial, sometimes literal shit hits the fan and parenthood becomes things other than what we’ve signed up for, but this one lesson will always turn things around for me, so long as I remember it. Being with our children is an investment, not an expense. There will be a payoff. It may not come right away. The profits may be minimal, but they will arrive. What’s important is that we start seeing parenting in terms of what we’ve gained, rather than what it’s cost us.

It turns out I didn’t lose two minutes after all.