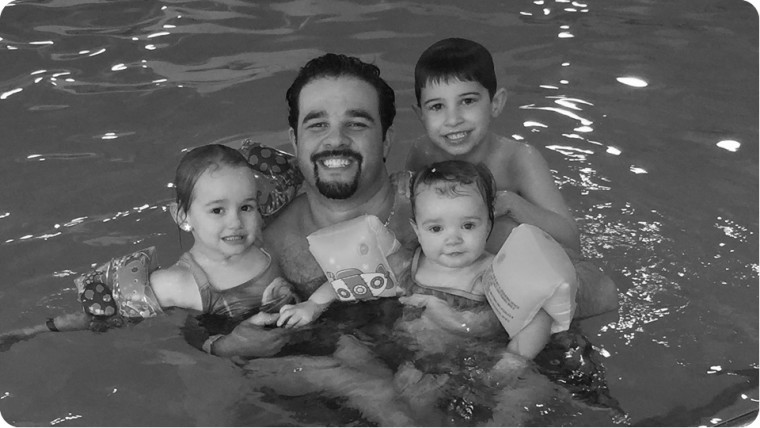 If you’re anything like me, you have regular conversations with the wall. Three-foot high walls that poop. It’s so hard to tell if what you’re saying is getting through to them, that sometimes you wonder why do I bother? Where is the evidence of parenting success in my daily life?

Is parenting an exercise in futility? No, but it’s close. More accurately, it’s an exercise in consistency. You can break through any wall if you chop long enough.

I recently saw this first hand, and I have to admit, it’s refreshing when it does.

It’s rejuvenating because it reminds us we’re not doing this for no reason and our instruction is not falling on deaf ears. Somewhere deep inside their big heads and tiny (but growing) brains, our message does rattle around. And sometimes it sticks.

Not long ago the family and I went on a little weekend getaway. We stayed in a hotel with an indoor pool, which at this time of year is a huge deal for any kid. At one point in between cannonballs, the older two and I swam over to the deep end.

With a few quiet moments on our own, I took the opportunity to teach them a little bit about safety in the pool. I was in the middle of writing a blog post about a water rescue my dad made when I was young, so water safety was on the top of my mind. With Joey and Gianna clinging to the wall, I explained to them the importance of not panicking in deep water. Simple instructions. But as I was talking to them, I could see the monkey banging symbols behind their eyes.

I talked for a little bit about treading water and how to remain calm when you’re in over your head (literally). But they didn’t care. I knew it. They knew I knew it. So, I cut the lesson short to resume the cannonballing. There will be other times to talk about water safety.

But Sometimes It Works

A couple days later we were back home and the kids were playing in the basement with my mom. Gianna came upstairs and explained that Joey had just told my mom all about how you shouldn’t panic when you’re swimming.

I was shocked. So many times I’ve seen them not give a crap about what I’m saying. I know exactly what that treatment looks like, and that was what I got from them in the hotel pool. But somehow, someway pieces of my instruction were absorbed. Unbelievable.

Think about it this way. I tried to teach Gianna and Joey a small lesson. Two days later, when asked about his vacation, that lesson was included in his summary of the trip. And anyone who’s ever asked a kindergartner how his day at school was knows that they usually offer very little in the recall department.

But not only did he relay that information back to my mom, but then Gianna overheard it and came back and relayed it to me. Usually the closest we get to reinforcement in our house is Dani or I calling the other in as backup during bath time. But this was different.

It could have been so easy to glaze over this. What’s the big deal? A five-year-old remembered a couple instructions his dad gave him.

I’ll tell you what the big deal is. The big deal is that this is proof it’s working. They can listen. They do absorb things beyond ridiculous YouTube videos. And they actually care what we say. Our words (big or small) have an impact.

As parents, we will always be their most influential teachers. So teach them. No matter how many monkeys are banging symbols and even as the glaze is dripping off their eyeballs. Keep teaching them. It’s working. You may not realize it right away, but it is.

I want to hear about one of your surprise parenting wins. Leave a comment below!

Comment2 | Share | Tweet | Share | print | email
Category: Present
Disclosure of Material Connection: Some of the links in the post above are “affiliate links.” This means if you click on the link and purchase the item, I will receive an affiliate commission. Regardless, I only recommend products or services I use personally and believe will add value to my readers. I am disclosing this in accordance with the Federal Trade Commission’s 16 CFR, Part 255: “Guides Concerning the Use of Endorsements and Testimonials in Advertising.”