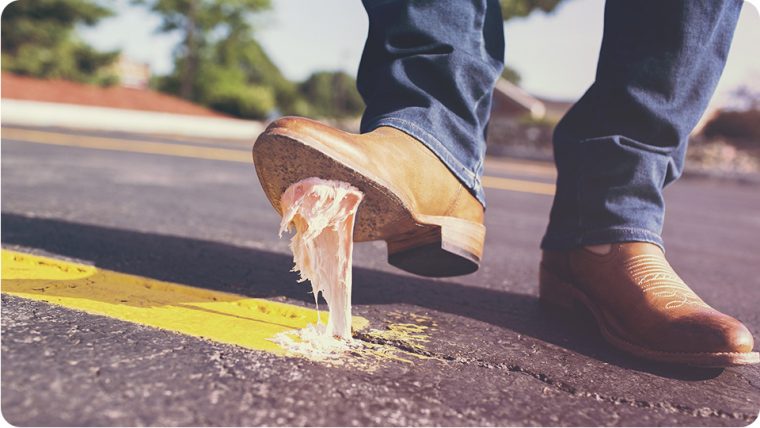 Being hypocritical is not a requirement to become a parent, it’s more like a symptom of becoming one. Still, hypocrisy is one of my major pet peeves, so I try hard to avoid acting that way.

It’s not always easy. I don’t think all people who act hypocritically do it on purpose. Not all the time at least. But it’s very natural to fall into the “do as I say, not as I do” camp. Especially when it comes to raising children.

This past week, I found myself trying to convince Joey to let the little things go, even as I was doing the opposite in my own life. It all started with a single piece of gum…

More often than they should, the kids will get a treat when they’re at the store with us. Gum is the big commodity these days. Joey found a strategic spot for his in our kitchen, and when he wasn’t carrying it around with him, that’s where he left it.

But Gianna sees everything. She knew his hiding place. She knows his backup hiding place. That morning she woke up and decided something — either she was just in the mood for some gum, or she was out to ruffle some feathers. The most likely option is that it was a happy coincidence she could do both.

She needs a lesson in the difference between rules and optional policy. But that’s a post for another day.

So she is chewing gum at 6:30 in the morning. Joey sees her and immediately becomes white-hot angry. If the smoke detector had working batteries in it, the smoke coming from his ears definitely would have set it off. Luckily, we used those batteries to get one of Gianna’s talking babies working again.

I’m joking. Even if I knew where our smoke detector was, I would never take the batteries out of it.

When Joey discovered he’d been robbed, he bolted over to his “secret” hiding spot to check on the rest. And that’s when all hell broke loose. His little plastic tub of Juicy Fruit was empty. Gianna had taken the last piece. I braced for a fight.

If he wasn’t so devastated, I would have spent the morning removing his elbow from her sternum. But instead, he fell to the floor in dramatic fashion.

What Gianna did was wrong. But in my opinion, Joey was prime to learn a more important lesson. I quickly scolded her for what she did. She didn’t seem to be affected by it, whatever bit she actually heard. Then I turned to Joey.

“I know. But you’ve done that to her before, too.”

“But this was the last piece! I want more gum.”

“We’re not going to get more gum right now.”

And there it was. The hypocrisy I was talking about earlier. See, what I haven’t mentioned yet, is that my own morning hadn’t been going so well, gum burglary aside.

I had work stress in my head from the minute my eyes opened. I had frustrations over my lack of recent posts to my blog. I had guilt over not working on my next book.

And all of these things, in the great big picture of life, amounted to less than one piece of gum. Yet here I was, allowing them to affect my day. They hadn’t ruined my day yet, but that’s where things were headed. So, as I sat there trying to teach Joey this lesson — one that I honestly believe in — with every word that came out of my mouth, I could only think one thing: you hypocritical ass.

“Joey, I agree it was wrong of her to take your gum. And I’m going to talk to her about that. But you can’t control what she does. You can only control how you respond. And if you respond with anger and let it keep you upset, then you’re only going to make your own day worse. Are you really going to let one piece of gum ruin your whole day.”

Now the good news is I heard myself loud and clear. As those words were coming out of my mouth, I was changing my attitude, my energy, my mood. Everything. It was exactly the pep talk I needed. Joey, on the other hand, …let’s just say he wasn’t so quick to feel better. Oh, and I did have to do that elbow-to-sternum removal procedure after all.

I think there are two morals to this story. The first is that we all have hypocritical tendencies. I absolutely despise hypocrisy. I do everything I can to avoid being that way because I can’t stand it when others are. But even the most committed will stumble. I do often. It does no good to beat ourselves up over that. Instead, I try to recognize it when it happens and correct it quickly.

That day my frustration was mostly internal, but if there was even an ounce of hypocrite showing, Joey would have picked up on it. And it would have diluted the value of my words to him. “Do as I say” is only meaningful if it’s followed by “because that’s what I do.”

The second moral is the effect of one piece of gum. What’s your “one piece of gum” today? How much control will you give it over your mood, your attitude, your feelings? Because the gum will take as much as we give it. But we don’t have to give it anything if we don’t want to. We can let others chew it all they want. Heck, let them get the sore jaw and the cavities if that’s what they’re after.

I don’t think Joey is quite ready for all of this lesson. A kid his age lives much more in the moment. There’s a good chance his day would have turned out perfectly normal whether I said anything to him or not. But we don’t always teach our kids lessons just for their well-being. Sometimes the words we speak to them are exactly what we needed to hear ourselves. And there’s nothing wrong with that.