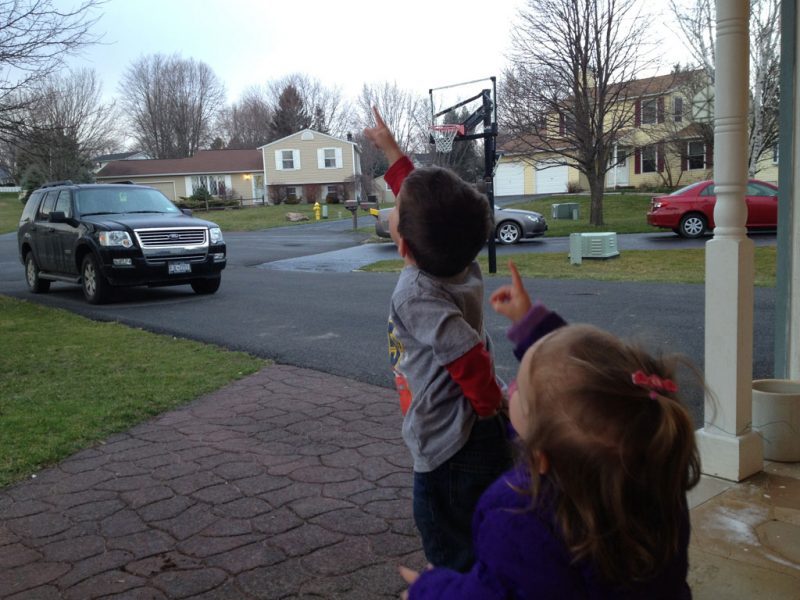 In the grand scheme of bad parenting, this is barely a blip on the radar, but because most will read the title of this post and react with a gasp! followed by a I need to see how awful this guy is! Lying to his children! His own flesh and blood! The little, impressionable minds that rely on him for direction in a cruel, sadistic world! How could he?!

To those of you who had those thoughts, I understand. I also have three things to say to you: #1 – Have you met my children?; #2 – It’s not as bad as it sounds; #3 – Thanks for the pageviews!

I suppose an explanation is in order, so here goes…

Gianna is about 20 months old. Anyone who knows or is parent to a 20-month-old knows that they are prone to meltdowns. The more minor the cause, it seems, the more major the reaction.

Here’s an example: A few evenings ago Dani was at work, and I was home with the kids. We were playing in the front yard, which typically turns into them neglecting their toys in favor of whatever death instruments they can find in the garage. Then, as I move to hang the hedge clippers in an even higher spot on the wall, they’re banging on the propane tank with a screwdriver and a garden shovel.

This isn’t a once-in-a-while kind of thing. On a per-surface-area basis, active children are at least twice as destructive as tornadoes. And that’s not something I made up. It’s scientific fact. It also comes with the territory, so I’m not complaining, but it does wear you down.

So once I took back the tools and told them to play with only things made out of plastic, Gianna got it in her head that she didn’t want the rubber band in her hair anymore. Not only does she look adorable when her hair is in a ponytail, it gets in her face when it’s not. I tried to talk her into keeping it in, but that wasn’t an option.

By this point I could see the tantrum brewing, so I reached up to try and take it out. These rubber bands are made for Barbies so I struggled to get a grip on it. Her patience was waning, and she started screaming. I’d seen enough of these to know what comes next. I had seconds before her knees would buckle and she’d collapse to the floor. I took one last, honest attempt at pulling the tie out. It didn’t work and she fell to the ground in a full-scale freakout.

She goes from this stage to “head-spinning” in a very short time, so I did what any desperate, quick-thinking dad would do.

I told her it was out.

She bought it. She took one wild swipe over her head and was apparently satisfied with what she found because that was the end of it. I could have sat there and held her still until I got the tie out, but I can’t see how that would have ended well. Instead, I lied to my daughter.

And not ten minutes later, I lied to my son.

Joey loves when airplanes fly over our house. Lucky for him, we’re in line with a popular flight path for planes on their way to our local airport. Unfortunately for me, this often leads to conversations like this one:

Joey: Look, Daddy! A plane!
Daddy: I see it, Joey! It’s loud, huh?
Joey: Yeah! Where it’s going?
Daddy: To land at the airport.
Joey: No, where it’s going?
Daddy: I’m telling you. It’s going to the airport.
Joey: No, no, no.
Daddy: Joey, I’m not sure I know what you’re asking me.
Joey: WHERE IS THAT PLANE GOING? THAT PLANE, UP THERE IN THE SKY!
Daddy: It’s going to Egypt to return the pyramids Vector stole in Despicable Me.
Joey: Oh!

When Mommy got home both kids were happy, Daddy was still in his right mind and all it cost was two white lies. That’s a bargain if you ask me.

Comment0 | Share | Tweet | Share | print | email
Categories: Future, Present
Disclosure of Material Connection: Some of the links in the post above are “affiliate links.” This means if you click on the link and purchase the item, I will receive an affiliate commission. Regardless, I only recommend products or services I use personally and believe will add value to my readers. I am disclosing this in accordance with the Federal Trade Commission’s 16 CFR, Part 255: “Guides Concerning the Use of Endorsements and Testimonials in Advertising.”