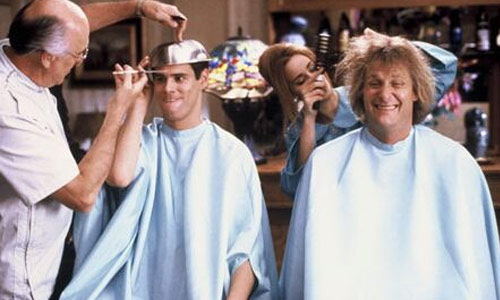 For years I have heard how great it is. How it’s my loss for being too proud, or too stubborn, to give it a try. I refused to believe I was stubborn. Hell-o, irony. Nice to meet ya. Instead, I considered myself to be disinterested, not really caring either way. But yesterday, I changed my mind. I decided, that for all men everywhere, I would step outside my comfort zone and try something new. (Cue the theme music.)

After all, how could I feel good about encouraging the kids to extend themselves as they grow up if I wasn’t willing to take that advice myself? That thought, and the possibility that I might actually enjoy it, led me to get in the car with my wife and head over to the local strip mall to put my gender stereotypes aside.

I was getting a pedicure.

Now the real irony in all of this is — although I like to pretend that I was doing all men a favor and testing out this cult-like female ritual; that I was being some sort of sacrificial lamb for the advancement of mankind — there are armies of men who’ve already made this leap and who now are regular participants themselves. So, while I convinced myself I was doing it all in the name of research, the truth was my experience was about as breakthrough as the scene in Dumb and Dumber when Lloyd Christmas announces that we’ve landed on the moon.

More on Dumb and Dumber later…but in the meantime, just understand this much: I was curious about why women enjoy pedicures so much, and I did want to see what the big deal was, but I also didn’t want to completely throw away my male pride, as ridiculous as that sounds. So, as a result, what we have is this account, this ridiculous retelling of my pedicure experience. For the record, I got one in the name of journalistic research.

Before we go too far, I have to admit, I’m really not bothered by stereotypes, and the older (read: more experienced) I get, the less I pay attention to them. I’m gonna be me, and the heck with someone that has a problem with it. The stereotype that surrounds the idea of a man getting a pedicure doesn’t really affect me. I don’t care that people know about this. If I did, I wouldn’t write a post for all seven of you to read. But, because of the stereotypes, a little bit of anxiety did accompany me into the salon.

For that reason, I was a little nervous as we pulled up to the salon. To make matters worse, Dani was finishing up a phone call, so we sat in the car for a few extra minutes and I was stuck letting my nerves get the best of me. I had already gotten past the idea of being a man who gets a pedicure. But the longer this went on the more anxious I got. Finally, after what felt like days but was only about two-and-a-half minutes, she was done and we went inside.

I don’t know what I was expecting to have happen when we walked in — a sudden gasp from all the women when they realized that a Y chromosome was trespassing in their domain, perhaps? Maybe they’d all cover their mouths to hold in their laughs while they pointed at me? Thankfully, neither of those things happen, though I wouldn’t have seen them if they had. I had made firm eye contact with the floor and stood there sipping on my iced coffee while Dani explained why we were there. 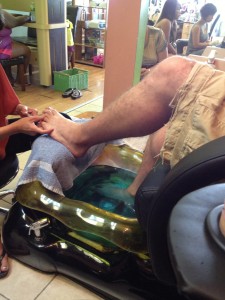 I followed her back to the pedicure chairs and felt my first justified twinge of discomfort. Have you ever been to a deli that has a very distinct style of ordering, fulfillment and collecting payment? If it’s your first time there, you feel out of place as all the other customers navigate the process confidently, knowing just what to say and when to say it. They know where to stand and when it’s time to pay.

That’s how I felt when we got back to the chairs. Do I sit? How do I sit? Should I climb in around the armrest or does it fold up? When do I put my feet in the water? Do I put my feet in the water or should they go on the footrest? Do I have to hold my coffee the whole time? Is it OK to talk or is this one of those things where people soak up the tranquility and one peep out of the noobie will earn a librarian’s scowl? Do they serve beer? ‘Cause I can really use one…

We finally sat and it was time to get started. I felt the nerves rise again, but this time it was out of physical discomfort.

See, not only was this trip an experiment, it was also a necessity. I’ve been neglecting my toes for way too long. I’d post a “before” photo but I don’t want to ruin your lunch. At first I was going to say I couldn’t imagine what they’d need to do to fix my podiatric mess, but the truth is, I could do more than imagine what they’d do. I’d seen it before…

I felt my temperature rising. I took a sip from my iced coffee and put it in the cup holder. They have cup-holders!

Without a doubt the woman who was working on me drew the short straw. I was expecting to see her throw up in her mouth when she saw my feet, but she didn’t. Then a co-worker walked past and my girl said something to her in Vietnamese and they both laughed. Great. That kind of thing happens to me all the time when I start stacking plates at the Chinese buffet, but there I’m OK with it. There I convince myself they are laughing out of amazement at my great feat. But here, I knew there was no way she was amazed at my great feet.

I asked her if I had the ugliest toes she’d ever seen. She laughed, and then she lied. “No.” 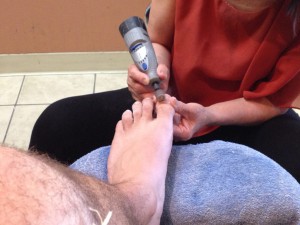 And then from that point on, she was nothing short of professional and fantastic. Putting myself in her shoes, I now know how people feel before climbing Mount Everest. Not only did she scale the thing, she did it in record time and with no safety ropes.

She also used every single tool in her toolbox to do so. And as a whole, I thoroughly enjoyed it. It was relaxing and for 90% of the time it felt good. There was one thing, though… 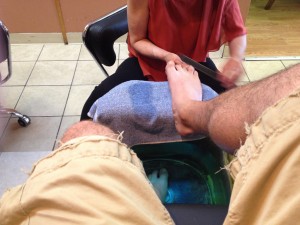 See how fast that file was moving? Makes me queasy just looking at it…

My equivalent to nails on a chalkboard is the nail file. I can’t stand the noise it makes and won’t let Dani file her nails when I’m around. Needless to say I don’t ever file my own, nor do I allow someone else to do so for me. What I now realize is how critical a role the nail file plays in nail maintenance. When you have toenails as bad as mine were, the file is the pedicurist’s best friend. Her version of Michaelangelo’s paintbrush, of Shakespeare’s feather quill. So if you want to talk about how the whole experience went, this part brings the overall average down quite a bit. Maybe it’s something I’ll get used to, and subsequent pedicures won’t be as bad. Did I just admit that I’d be back?

When the filing was over, and the cold sweats went away, I did enjoy myself. I found it relaxing (despite the fact that the vibrating chairs weren’t working that day. They have vibrating chairs!?) and I can’t get over the transformation. I will now wear flip-flops with pride.

As for the idea of more “experiments” like this one…I won’t rule it out, but don’t expect to see me hooked up to the childbirth machine anytime soon…