This is the second post in a two-part series. Read Part I here.

Last time we left off with Joey sprinting down the beer aisle and taking out soda displays. We got to the end of the booze and arrived right in front of the milk coolers.

I reached in for the 1% milk, and when I returned back to the cart he was staggering back with a gallon of whole milk bear-hugged to his chest. Not wanting to see how much floor surface area a gallon of milk covers I quickly gave him a hand and we had finished our first task! Milk – ✔

Never satisfied, Joey was on to the next thing. Store brand sour cream. In the cart, no questions asked. I sent him up ahead to pick out some string cheese sticks and sneaked the sour cream back into the cooler. It turns out the cheese sticks were a good distraction. Our kids are like mini-goats. They love dairy. I have the diapers to prove it. Wait, that sounds weird. We don’t keep the diapers. I’ve seen the diapers to prove it.

Anyway, I caught up to him and as I was busy comparing the prices of 12 sticks versus 24 sticks I heard him say “We need eggs!”

I looked up and saw him balancing one end of a 24-egg carton on the side of the cart and the other end on his outstretched fingertips. I have no idea what in the world he was thinking. We had eggs at home already. 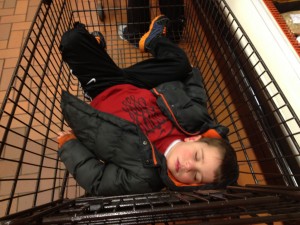 It would have been easier if he was doing this in the store, but who wants easy?

I know it would be more entertaining if I didn’t save the eggs, but this blog is mostly non-fiction. I grabbed them before any harm was done and we made it out of the dairy aisle without any milk or egg casualties. By now he was starting to get discouraged because I wasn’t letting him put anything in the cart. He is 100% intolerant of micromanagement. So I showed him which orange juice we wanted and he dropped it in the cart. Literally.

We moved on to the frozen foods and I grabbed the waffles in stride and threw them over Joey’s head and into the cart. He turned around and gave me a what the hell was that look. Waffles – ✔

By this point I can hear Gianna talking and laughing from only a couple aisles away. Joey and I had been given only three tasks, the girls had already covered 80% of the store and we still had to get bread.

At the end of the frozen section, I was relieved at what I saw next. It was the bread aisle, our mission was almost complete.

Without turning around he said, “We need more chocolate things.” Note to self: maternity test is not necessary.

I convinced him he’d like chips better, and he gave in, which was great because the chips were at the end of the bread aisle. Have you ever seen a dog at a fence, running back and forth up and down along side it? That was Joey in the chip aisle. While he was distracted I took every moment figuring out the difference between whole-grain and multi-grain. Just as his attention waned, I made a bread choice (it was the correct one!) and we were finished. Bread – ✔

It only took 25 minutes, and a few near-miss disasters, but we’d accomplished all three of our tasks.

I was feeling pretty good about myself. Against all odds, we’d done it. There was no way anyone would ever think we could have finished our list with a three-year-old running the show. Joey was a superstar genius child. He could do anything, be anyone. He had mastered that supermarket. Veni, vidi, vici.

“You’re gonna go down the toilet and I’m gonna flush you down the pipe,” he replied. 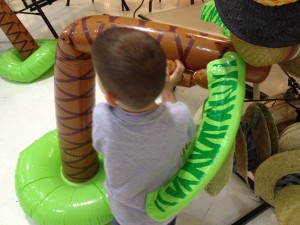 And just like that I was reminded who he was. He was a three-year-old child who was about to hear the threat of punishment when we got home, because between my shock and the humor in his words, there is still the desire to teach him manners and how to appropriately talk to anyone, particularly his parents. But before I could get my sentence out he abandoned the cart in mid aisle and ran to the blow-up beach display at the front of the store. He gave the air-filled palm tree a giant hug and said, “I love you, Golden Coconut! I’ve missed you!”

And we’d come full circle. He was now a three-year-old that was just being himself. One that was going to make mistakes and say the wrong things, but also one that wanted very badly to do well and that had a heart of gold(en coconuts). He showed that he was deserving of the independence he so badly craves, but that he should be supervised while doing so.

We got to the checkout aisle and he made his way up front and proudly sat on the bench, watching his mother and me load the groceries on the belt and pay for the items he’d selected. I’d be lying if I said I wasn’t proud of him as well.