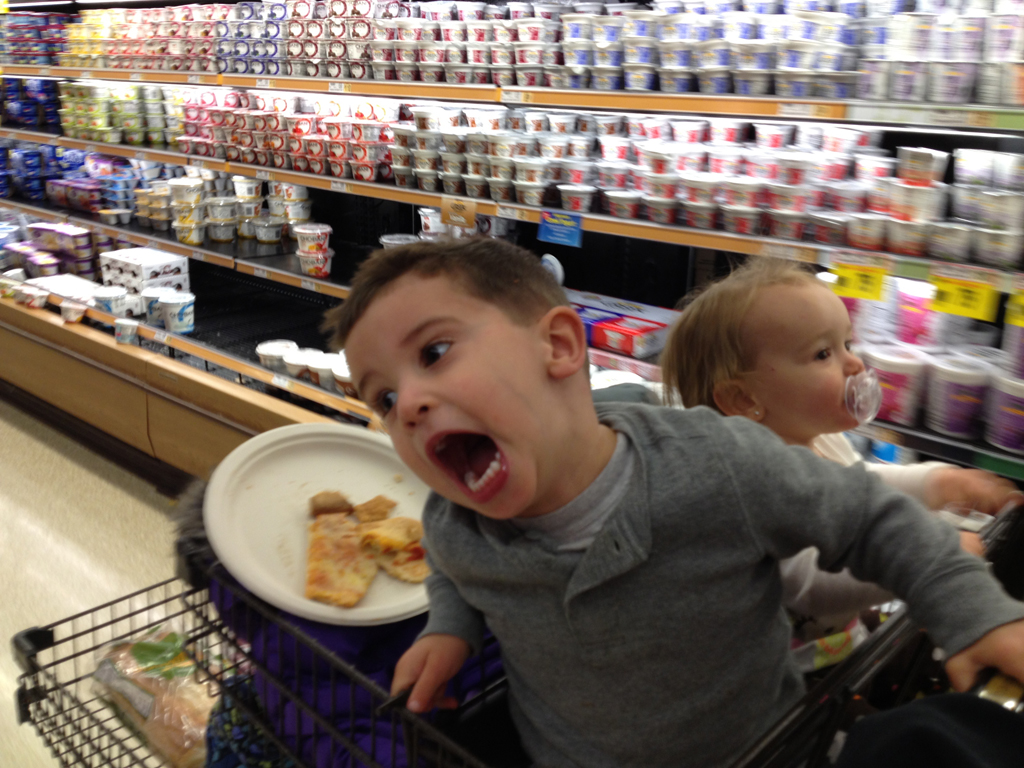 If you’ve got some time to spare and are looking for a laugh, take a 3-year-old to the grocery store and let them shop on their own. I accidentally discovered this entertainment over the weekend, and my only regret is that we hadn’t tried it months before. I don’t normally have patience for stuff like this, especially at 8pm on Sunday night, but for some reason I played along. And I’m so glad I did.

Dani, the kids and I just finished eating dinner out with my parents. It was at one of our favorite spots – one with some arcade games, my nemesis the skill crane, a pool table and some other stuff that makes kids lose their minds. It cost me $4 to get three Dum-Dums, a two-pack of Starburst and a junior-sized package of Skittles out of the “winner every time” skill crane, which, coincidentally, is exactly what it takes to get our kids to leave that restaurant.

So we left. A broke Dad, his wife and their two lollipop-clad mini humans in tow.

Independence is the word of the month in our house. Both kids are interested in doing things on their own, which usually takes longer and creates a mess, but it’s our job as parents to help them learn, right? So, immediately Joey said he wanted to walk into the store on his own. I let him. Mostly because he’s heavy and I’m out of shape. But it’s also good to give him some freedoms, to encourage that independent spirit. And I parked pretty far from the store. And he’s heavy.

Not only must he walk on his own, he can’t be bothered to hold my hand. Nor is it acceptable for me to hold his hood, shirt collar, or gently rest my hand on his shoulder. The walk in from the car made me feel like Kevin Costner in The Bodyguard. Here’s this happy-go-lucky “target” who thinks he’s invincible and my head is on a swivel on the watch for cars, rogue shopping carts and Kamikaze seagulls. (Remember, the kid smells like chicken tenders, french fries and artificially-flavored sugar).

Lesson #94 – Going to the grocery store on an empty stomach is both irresponsible and dangerous.

This is where I normally would have just scooped him up and put him in the cart. But I didn’t. It was late on Sunday night, nobody was around, what the heck?

As is our custom, Dani sent Joey and me to the far side to pick up some select items and then started working her way through the store. Before we split, Dani gave us a mini-list of items that were going to be in our area. As I listened to her, Joey took off like a dog off its leash. I committed her requests to memory (waffles, milk, bread; waffles, milk, bread) and ran after him. I caught up and redirected the cart just before he took out the ankles of an unsuspecting employee.

I decided to let this play out a little bit and let Joey decide which aisle to turn up. We had to go to the far corner of the store, anyway. Those psychologist-marketing crazies think it leads to more impulse buys if you have to walk past everything else in the store to get the most common items. They might be crazy, but they’re damn smart. I was up against my own impulses – thankfully, I’d already eaten (see lesson #94) – but even more dangerous were Joey’s impulses. For what it’s worth, he’s impulsive by three-year-old standards – which means there’s no idea too spontaneous. 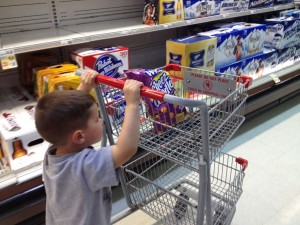 Beer and Cheez Doodles. We should let him do all the shopping.

So we walked down the main aisle, and I told Joey we had to turn, but he could pick which aisle. Naturally, he chose the beer aisle, but not before grabbing a bag of Cheez Doodles. Proud papa that I was, I made sure to chronicle the moment, and before I could even put my phone away he was off again. This time he clipped the side of a Sprite display before I could catch up and the cart slammed to a stop.

Unfazed, he backed out and continued on his way. By this point, I was so enamored with the situation, I didn’t know what to do. Step in and be a responsible parent or let him continue shopping and promote his independence (and entertain myself). I chose to let him continue…

And I want you to continue, too. So, stay tuned for Part II coming soon…