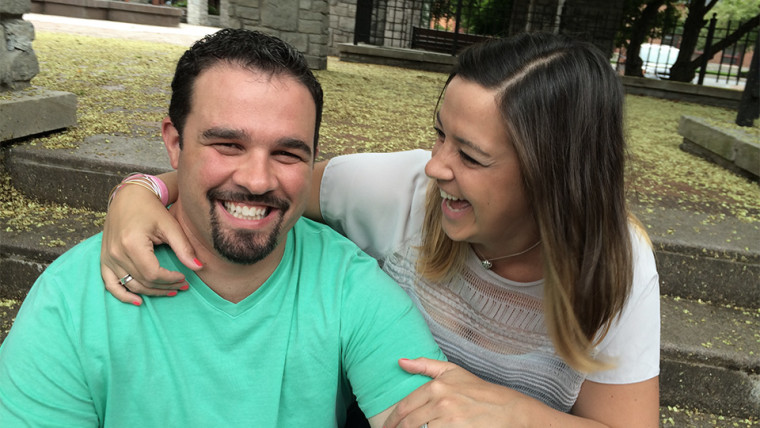 Today marks seven years that Dani and I have been married. Seven years goes by fast. My father-in-law recently reminded us that in those seven years there’s been one house, six vehicles, three kids, three lawnmowers, three jobs, one book, three pet fish and most importantly, one love.

We’ve packed a lot into that time. We’ve learned a lot, and we’ve loved a lot. It’s been rewarding on many levels. From a personal standpoint it’s comforting to go through life with someone by your side, looking out for you, encouraging you, and inspiring you.

From a family standpoint, a strong marriage has provided us with stability and balance that I couldn’t imagine not having. It’s served as the foundation of our family. As parents, our marriage has been our greatest asset.

To honor the seven years we’ve officially been hitched, I want to share seven reasons why we’ve been able to be better parents as a result of a happy marriage.

Just as it’s nice to go through life with someone you can trust, it’s nice to have someone on your side when it comes to raising kids. I don’t know about you, but our house is crazy. Three kids under six will test you on many levels. Without someone who is in the trenches with you, fighting a common enemy (yes, many times our children are the enemy), the days can be very, very long. We know that we have each other’s back, that we’re in it together. If I’m Jordan, she’s Pippen. She’d probably correct me and say she’s Jordan. But either way, the point remains: neither of us would be as good without the other. But together, together we’re kicking this parenting thing in the teeth—most of the time…

2. We Present a Unified Front

On those days (or weeks) when we’re not in full parental control, one thing that helps us keep our heads above water is the idea that we stand together. We rarely undermine each other, and on the rare occurrence when it does happen, we call each other out. It’s scary how united the kids can sometimes be when coming at us with requests, pleads, and questions. If we aren’t equally strong together, they will break us down systematically. It’s fascinating to watch, but devastating to our sanity. By maintaining a unified front together, and remaining strong in our support of the other, we show the kids we won’t easily give in. It’s like water headed towards the foundation in your house, all it takes is one crack in the cement. If there’s a crack, the water will find it. And once it does, the damage is done.

We’re all susceptible to bad days. Maybe I had a stressful day at work. Or Dani had a bad night’s sleep and is worn down. We’ve found success by being willing to pick up the slack when necessary and bail our teammate out. Because we’ve both bought into this idea, it rarely happens that one of us feels like we’re doing everything all alone. Things have to get done whether we want to do them or not, but it’s nice to know that on those tough days, when we’ve got little left in the tank, we can count on each other to pick up the slack.

4. We Take Turns Being the Heavy

Of all the reasons on this list, I can see Dani disagreeing with this one most of all. She is definitely the disciplinarian in our house, but that doesn’t mean I am completely useless in this area. There are times when we’ve both played warden, and there have been other times when good cop/bad cop has worked. We also try to make sure that the one who did the punishing is the one who grants parole. Otherwise, the punisher is seen as “a big meanie” and the parole officer is the “favorite.” It’s not fair to the punishing parent, and it’s not fair to give the kids the impression that we are siding with them over the other parent. We’ve made an effort to align our ideals so that if Joey is in timeout, I can be confident he’s done something worthy of Dani sending him there.

5. We Have a Mutual Respect

Both Dani and I understand we each ultimately want what’s best for the family. We know what we’re trying to accomplish is not easy. Because we’re both in the foxhole of day-to-day parenting, we can appreciate what the other is going through. We recognize that the other is grinding because we’re grinding it out ourselves. As a result, there is a mutual respect that can only come from having overcome similar challenges. This is huge because it works both ways. It allows us to be a stronger team when it comes to being parents, and it helps to create a stronger marriage overall.

6. We’ve Learned How to Fight

Over the past seven years, I’ve learned this is one of the most underrated keys to a happy marriage. Happily married couples don’t not fight. They just know how to fight. We have disagreements about all different parts of our lives. From decisions about the kids, to finances, to paint colors, if there is more than one possible choice, we’ve probably fought about it. The difference for us is that we’ve made a conscious effort to confine our fights to the issue at hand. We don’t allow our disagreements to become personal. We fight the other’s stance on the matter and nothing else. In doing so, we’ve been able to disagree and limit escalation of the problem. It’s important for the kids to see us disagree from time to time because they see conflict and resolution the way I think it’s supposed to be. There is no harm in having a difference of opinion. It would be strange if those differences didn’t exist. Instead, I want them to know that you can stand up for what you think is best in a way that doesn’t become a personal attack. I also want them to know that a good old-fashioned compromise is perfectly acceptable, too.

7. We are Setting an Example of Love

Our actions are more important than anything we might actually say to our kids. If I tell them to brush their teeth, they may or may not care. If they see me regularly treat their mother with respect, they are almost certain to soak that example in over time. Whether we’re fighting, shuffling through our daily routine, or admiring the life we’ve created, we are setting an example for our children. In our case, we try very hard to make that example one of love. By demonstrating what’s most important, they see us walking the walk and that lesson becomes very difficult to ignore.

I’m very fortunate to have spent the last seven years with a woman who enriches my life in so many ways. Our marriage isn’t perfect — far from it. But that’s okay. I think rather than perfection, the goal should be to create a relationship that makes your life more fulfilled. Not only has it been a fulfilling seven years, but we’ve found a way to leverage our marriage into one of our key parenting assets, and that is invaluable.

What about you? Have you experienced any of these seven benefits in your relationship? What did I leave out? Leave a comment below.